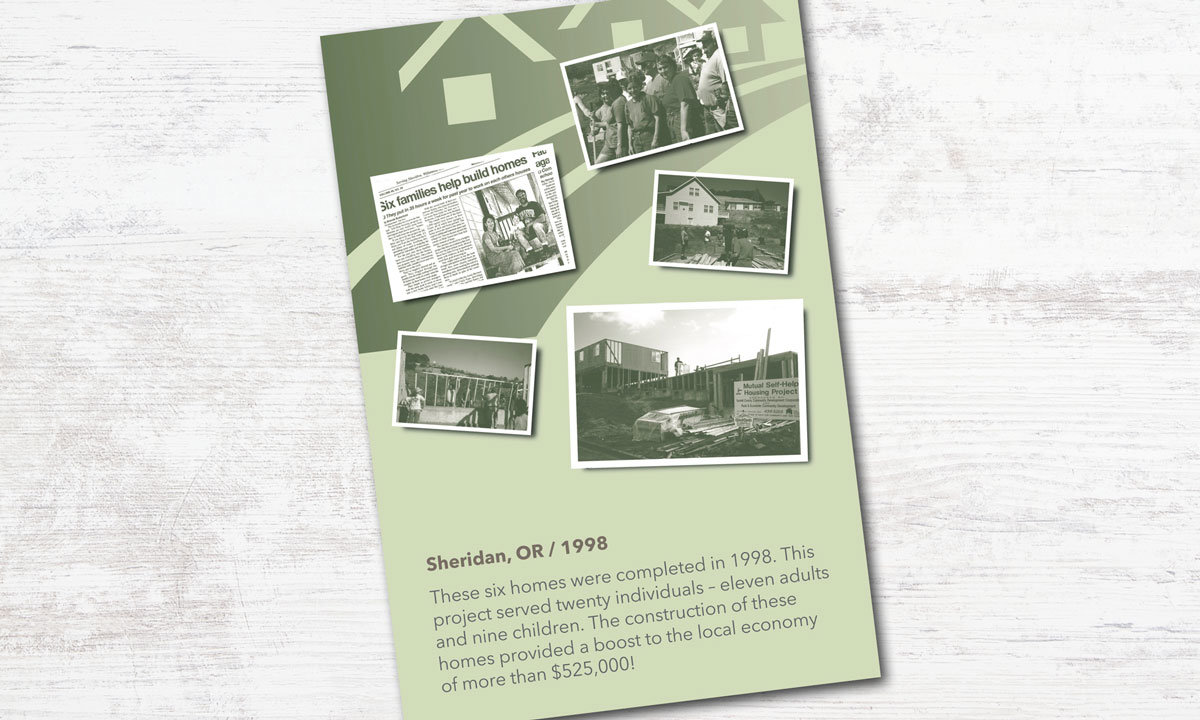 Community Home Builders is a McMinnville-based non-profit organization that builds homes for low- and moderate-income families. The future homeowners work as part of the building crew not only on their own projects, but also on homes for other families. In the end, community members get affordable, long-term housing that already boasts value in sweat equity.

In 2010, Community Home Builders celebrated 20 years of creating quality neighborhoods for residents in several Yamhill County cities. In all, these neighborhoods provided shelter for more than 200 families, and CHB wanted to mark that milestone.

In addition to the anniversary, the non-profit organization wanted to launch a rebranding campaign as a result of a name change. Before becoming Community Home Builders, the organization had been known as Yamhill Community Development Corporation. The new name, the board felt, would better convey the important work the group did in the community.

In 2010, the team at 237 Marketing + Web set out to craft large storyboards that would illustrate both the new name and the non-profit’s role in the area. The boards weaved a tale around the evolution of the organization and the vital service it provides to residents in several communities. All of the illustrations showed the difference that self-empowerment made in the lives of CHB beneficiaries. In the end, they even inspired other families to apply for the mutual self-help housing program.

Fast forward to 2016, and the 237 Marketing + Web team again got the call for help from CHB. The organization was moving into a new building in McMinnville and wanted to commemorate the occasion in some way. Rather than reinvent the wheel, 237 Marketing + Web suggested reworking the 2010 storyboards to use as artwork in the new space.

With a fresh design, new statistics and a 2 foot-by-3 foot format, the boards bring beauty to Community Home Builders’ new headquarters. Not only that, CHB members can use them to demonstrate what is possible when local residents collaborate. We hope that the artwork will attract new program applicants with its beautiful, educational and historical content.